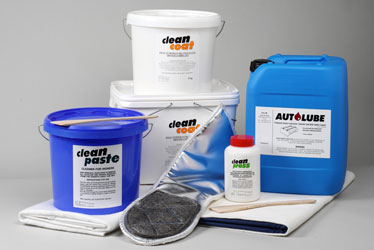 Meet the simplest and most effective permanent springing system for flatwork ironers.

Used by over 85% of the world's ironer manufacturers

The padding of a flatwork ironer consists of two elements: a base level of springs and a top cover of needle-felted fabric. This combination fulfils a number of very important functions as follows.

Springpress is the simplest and most effective permanent springing system available, outdating all other conventional flatwork ironer padding systems.

By courtesy of Laco

Why is Springpress superior to other padding methods? 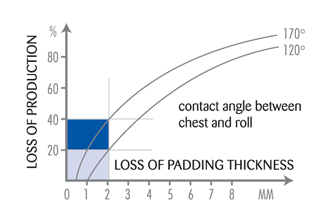 Full contact between ironer roll and chest is essential to achieve production levels an ironer is designed to reach irrespective of the condition of the fabric clothing: new or old. A loss of padding thickness as small as 2 mm reduces the production of an ironer with a 170 degree contact angle by 40 %! 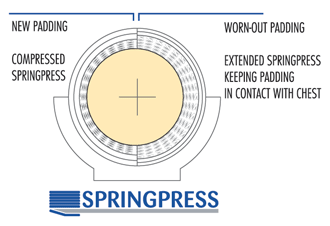 Over 100.000 ironer rolls have been covered with Springpress and it is the original springing system used by over 85% of the world’s ironer manufacturers.

Why use SPRINGPRESS on your ironer?

We took our caps off to you 45 years ago.
With good reasons!

Much publicity has been made about adding caps to the top of coiled springs, claiming that this provides benefits. Contrary to these claims, intensive research and testing done over 45 years ago proved just the opposite!

Many leading manufacturers of flatwork ironers in the 1960’s and 1970’s provided rolls equipped with individual coil springs including caps on top. SPRINGPRESS was developed and perfected without caps after considering the input of the engineering departments of these manufacturers. The following are the ADVANTAGES to SPRINGPRESS without caps.

No caps to come off.

Anyone who has replaced needlefelt padding knows how hard it is to peel off. SPRINGPRESS has no hooks and still holds the padding so that it never moves. A problem with caps is that the fibers of the padding adhere to them, and the hooks in the caps make it worse. Eventually, replacing the needlefelt will cause some of the caps to come off, resulting in a wet spot forever!

If a severe jam should occur in the ironer, SPRINGPRESS springs may slide along the strip, but this causes no real damage and can be easily repaired with a screwdriver and pliers. If a severe jam occurs in an ironer with springs that cannot move and have caps, many times the wire or strip breaks. In other cases, the caps bend backward and sit at a 90 degree angle, which causes them to perforate through the padding and scratch the chest.

As users of laminated springs know, the adhesion of old padding to the springs is so great that pulling it off causes the height of the springs to increase, making it necessary to re-calibrate the springs before re-padding. The same thing happens when caps are on the top of coil springs. They become elongated and without re-calibration, result in overpadded rolls and loss of padding life and production.

The solid metal portion of caps prevents water droplets from escaping through the exhaust system without finding a way around the solid barrier. This reduces the drying capacity of the ironer. Eventually the padding becomes clogged and the vacuum system removes less evaporated moisture.

Perforated strips and punched caps are not needed for sufficient exhausting of water vapor.

The space between wires of SPRINGPRESS and underneath the strip is always greater than the sum of the roll perforations, so the vacuum system is properly balanced with SPRINGPRESS. Too much vacuum will cool down the ironer, which is a disadvantage when trying to dry wet material.

The small diameter of SPRINGPRESS divides the pressure much more evenly, resulting in better ironing quality.

The conclusion is that caps on coiled springs are a step backward, not an improvement.

This is a classic example of trying to be different only to have some sales arguments.

This is definitely not in the best interest of the end user!